This page is under construction (aren't they all?). Although I am happy to act as editor of the page, I need some feedback from anyone who can offer constructive criticism (is the layout a sensible one?), extra information, suggestions for development and so on. Please send ideas to me. I will be adding more information of my own, but would like to have feedback from anyone who finds this page useful and can add more data to it.

This information has been collected from a number of sources including Stanley Gibbons Catalogue, part 2 (5th edition) (Austria and Hungary), Steichele: The Foreign Post Offices in Palestine 1840-1918, Keith Tranmer: Austrian Post Offices Abroad (part eight) and my collection of postal history from Palestine and the Middle East. The layout of the general tables is based on that in Gibbons.

The map of the region is from Ferchenbauer's catalogue (2001)

There are two types of tables: general ones listing the post offices, giving the modern location, the type (operated as a consular office or by Austrian Lloyd), the dates of opening and closing, the date when Austrian Lloyd offices were issued with official handstamps, and what stamps have been recorded (A=Austro-Hungarian stamps for use in the Ottoman empire, V=Lombardy and Venetia, F= stamps with French currency). The second tables are specific to a given office, and give more details of known handstamps and their usage. Dates on handstamps with Roman numerals for the month are shown mm(R). 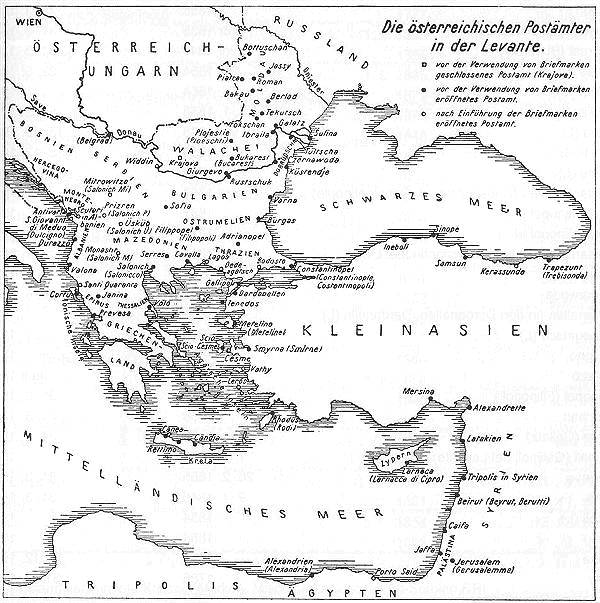