Postal History of the Levant and other overseas post offices 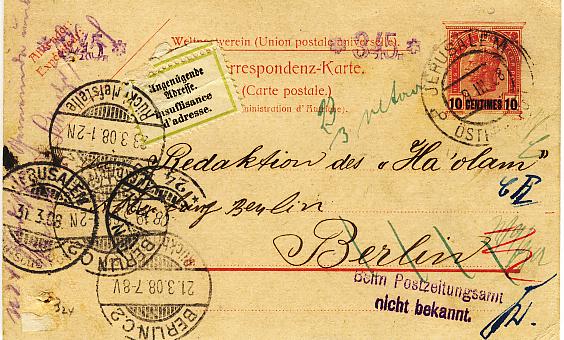 The main aim of this page is to provide links to tables which summarise the postal history of these overseas post offices. In many cases stamps were issued or overprinted for these offices; details can be found in most stamp catalogues. The tables linked form this page describe the period of operation of the offices, and the postmarks that were used. In some cases these are illustrated with examples.

The card shown to the right demonstrates some of the fascination of this area of postal history. The card is a postal stationery card of the Austrian post office with denomination 10centimes (currency used in Crete, but accepted for mailings in other places) and the design is listed by Bale as type 114, first issued in 1904. It was posted in Jerusalem through the Austrian post office, with datestamp Steichele type 549 dated 9th March 1908. It arrived in Berlin later that month, and the post office decided that there was insufficient address. So it went to the dead letter office, and was handstamped there three times (19th, 21st and 23rd March 1908). The Berlin office attached the bilingual sticker for international returned letters, saying there was not enough address. That office also used its staff's knowledge, as shown by the purple cachet "Beim Postzeitungsamt/nicht bekannt". There is a handwritten instruction "23/3 retour". Then the card was sent back to Jerusalem and it was received by the German post office on 31st March 1908 (Steichele type 235).